The motherboard... it is small.

Staff member
Moderator
I hate to admit it, but I somehow forgot I had this beauty of a motherboard lying around. I ended up stumbling on it earlier and immediately slapped my forehead. It's not often we take a look at mATX or smaller motherboards, but when this thing arrived at my door, I found myself really excited. Why? Because it's an LGA1156 mini-ITX motherboard, of course! It's Gigabyte's H55N-USB3, and despite it's small size, it packs a punch. 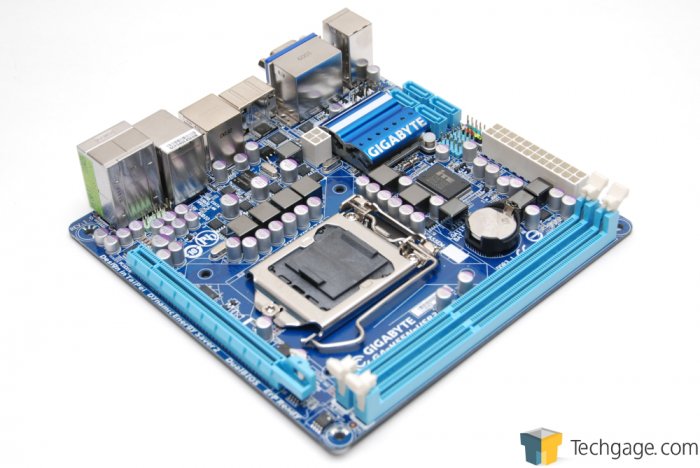 The board features USB 3.0 as the name suggests, which to me, is very, very impressive. After all, you don't even see that kind of functionality on lower-end ATX motherboards all too often, let alone mini-ITX. It also features Gigabyte's "On/Off Charge" support, which boasts faster charging of electronic devices, such as the iPhone and other iP*** devices.

Interestingly enough, the board sports 2oz of copper, like many of Gigabyte's other boards. It's interesting because that's typically a feature associated with overclocking, and looking at this, I sure don't think overclocking would be on my mind. I am still debating whether I should even TRY to overclock it or not... it just might not be built for that impressive of an overclock. I'll have to check in with Gigabyte on that one.

Just for fun, and to give a sense of scale, I installed NVIDIA's GeForce GTX 480 on the board, and well... enough said. Let me tell you, it's REALLY weird to remove the motherboard from the GPU, rather than vice versa 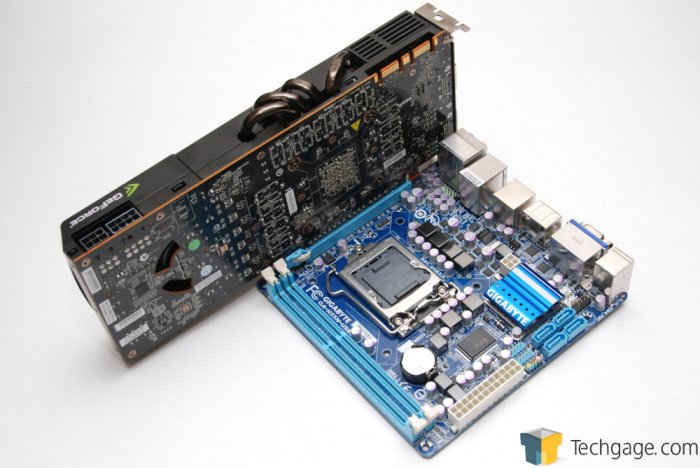 You can expect a review in the weeks ahead. If you want to know anything specific about it before then, or want me to tackle something in the review, speak up!


Ok, on a more serious note, I’d love to see some benchmarks on this. I’ve actually been thinking about getting an ITX and attempting a mod of some kind. I was just put off because all I could find was 775 boards, so not much in terms of long term performance. These boards really do scream ‘Cute’ and ‘Mod-Me’. Overclocking... while it could be fun, I doubt you could do much, considering the power supply required and the tight space they are usually fitted in. How big is a full size ATX PSU compared to this?

Something about this screams "Make me a mini mobile PC PLEASE!"

HTPC anyone? You could install this thing behind a wall mounted tv!

Staff member
So tempted to pitch the idea of building a mini-ITX system for my wife.

I love seeing some solid iTX boards making it to the market. You could make a pretty compact and powerful PC with a board like this.

Rob Williams said:
Just for fun, and to give a sense of scale, I installed NVIDIA's GeForce GTX 480 on the board, and well... enough said. Let me tell you, it's REALLY weird to remove the motherboard from the GPU, rather than vice versa
Click to expand...

Haha, that is so silly looking it's just crazy. Next thing you know in 10 years they will be building the motherboard directly into the GPU card. Instead of having an integrated GPU on chip, they'll just put a processor socket on the back of the GPU.

Staff member
Moderator
Nah, it'll be the grand and comical case of the battery being bigger than the motherboard.... a whole CR2032... Does that mean the newage computer will be a plastic shroud covered in vents, small enough to fit in your pocket and hot enough to burn a hole through it .

The PSU would be a problem, but im sure there is some solution.

Edit: Maybe even hook a touch screen up to it over top somehow... iunno. But the entire board a ram sticks length squared. There are just got to be some wicked cool things and places you could put this.

LOL I just realized...go to newegg.com and look up this board. It comes with an IDE cable...but doesn't even have any IDE slots. FAIL

TheCrimsonStar said:
LOL I just realized...go to newegg.com and look up this board. It comes with an IDE cable...but doesn't even have any IDE slots. FAIL
Click to expand...

You're right... I see it in another review of the board as well. Talk about an oversight.

Ran and checked one I have lying around, mine just has 2 SATA cables and I/O plate. Did any of these really ship with an IDE?

Just checked my H55M-USB3 (man, I have a collection of motherboards all of a sudden...) and it does come with and IDE slot and a cable. I'm guessing this is where the confusion arose.

so they're sending you an IDE cable with the N model just to confuse you then haha.

TheCrimsonStar said:
so they're sending you an IDE cable with the N model just to confuse you then haha.
Click to expand...