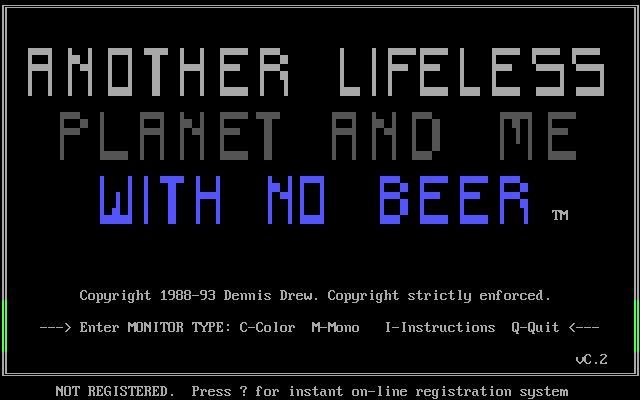 ​
(btw, so cute how we used to spell online)

Staff member
Moderator
I love those old games that ask you to choose between color and monochrome. The memories...

So, recently something was brought on IRC I'd like to see discussed further.

Beer Pasteurization.
This isn't a widely known thing among beer advocates. The process is simply described: Beer is warmed up to a certain temperature, before or after being bottled, in order to remove any bugs and increase its shelf life. It is then cooled down back to room temperature and shipped. beer sold on kegs isn't normally pasteurized, since this is beer that will be consumed rapidly.

Who does this?
Almost all brewers when selling bottled or canned beer.

The effect if has on taste.
Some beer advocates argue that this process affects beer taste and that beer is actually tasted before pasteurization in order to measure its quality. For this reason they dislike drink beer from bottles and only drink tap beer.

I have several questions/issues with this.

I'm normally very suspicious of "little known secrets" that suddenly gain a big dimension, like of beer pasteurization that suddenly becomes the new fad among advocates, probably because someone once mentioned it and everyone jumped on the bandwagon. Beer pasteurization isn't something that just started yesterday. I always feel this is how you actually start distancing yourself from an advocate and become someone living in fantasy land.

Let me do the offensive thing here and rate beer lovers as the following:

As with everything in life, the closer you are to the middle, the healthier and more "normal" (as in, you won't scare people away) is your appreciation of something.

Let's get this pasteurization thing going.

Exactly how is taste affected? We can say that about some beers. I expect certain pasteurization techniques to be more damaging than others in the presence of certain beer components. But I certainly have an hard time agreeing to the generic notion that beer pasteurization destroys the beer flavor. And I definitely don't see what we call a "Good Beer" seeing its flavor ruined or significantly altered by pasteurization, since we define a beer as "Good" from what we are tasting from a bottle.

Another thing I find interesting is that those claiming pasteurization significantly alters taste and they only drink tap beer because of this, constantly fail to mention one or more specific brands where this happens so that others can see it for themselves. The issue of beer pasteurization is always left foggy and inconclusive, without any real chance for peer review. That's no way to get people into a serious debate, but it is a good strategic if you want to start a baseless rumor.

Also, beer shows (which I attended a few) always serve bottled beer along with tap beer. International competitions are held often based on bottled beer. Beer that has been pasteurized as anyone can see from the shelf life at the bottom of the bottle (unless someone wishes to now claim companies lies on international shows and the judges don't really understand much about beer to spot it). Seems odd that such a significant change in taste, goes ignored on specialized media or international shows.

Finally, one thing is certain. Pasteurization can affect the taste of beer. It's hard to dismiss that, flat out. It's a chemical process. It has the power to do so. The real question is however how much and in what way. That is never answered by those claiming this process as destructive. Because quite frankly, why shouldn't a beer taste better after pasteurization? Couldn't it? Also, could it positively affect other beer qualities? Has this ever been discussed on a serious manner? No, it hasn't.

To anyone choosing to only drink tap beer, I wish you all the best. I'm terribly sorry you can't taste a large portion of beer brands who don't offer tap beer or is hard to see it being offered. It's terrible that you chose to out yourself from it. But I'm sure, it's not for any irrational belief or placebo effect.

I, for one, do not believe that all beer need be pasteurized, and actually it would greatly affect the flavor of the final product. HOWEVER - that doesn't mean it's a bad thing! Different beers need to maintain differing levels of yeast to maintain or enrich their taste.

For instance, many of the Trappist and Abbey breweries in Belgium do not ever pasteurize their beers - either on draft or in bottles. The reason is because the beer that is shipped is expected to further ferment within the vessel, and "ages" much like a fine wine. Killing the yeast would actually cause these beers to taste unfinished and overly saccharine as the sugars would not be properly decomposed.

On the other hand, a beer that does not specifically require active cultures could end up tasting awful if they are left after the bottling process, for the exact same reason - the sugars could become overprocessed, leaving a bitter, metallic taste that you can tell instantly is not the result of the Hops. The beer goes, in a word, "skunky."

As such, I look at pasteurization as a tool that helps a beer maker control and refine the craft further by stopping fermentation at the desired points, not simply a preservation method. In most craft beers, the preservation should be handled by the addition of the Hops to begin with, but milder beers require that you not add a large degree of them and thus you need other methods to stagnate the yeast and prevent fermentation past the desired point. These beers would not even be possible (or at least commercially viable) without pasteurization.

And for any purist who truly whines about it, the same beers that are pasteurized in bottle are also hit before the keg, I think! You'd be limiting your palate to only some of your closest microbrews (that don't ship nationally) and specific national/international beers that maintain the yeast for a reason. What a shame to deny yourself so many other great beers simply based on what should, for all intents and purposes, be considered a tool in the process the same way as the fermentation is!

Staff member
I can't really speak for beer pasteurization, but I've noticed that a new brand of juice is showing up in US supermarkets... basically OJ, Apple, and some other flavors... but it's not pasteurized. It's being marketed as a premium juice with better flavor and higher vitamin/mineral content because it doesn't undergo the pasteurization process.

In my opinion, I don't think the risks outweigh any perceived gains. Even after tasting the OJ/Apple flavors for myself I can't really tell, and I'd rather not run the chance of catching some bacteria because I wanted to pay more for an exotic brand of juice. As for the company itself, it has been making inroads in stores. I'm wondering how much of that has to do with current trends against established industries / scientific thought in general.

And as Brett said already, beer still ferments and the process actually helps protect the beer from foreign bacteria. The alcohol content does the same thing as well to some extent. That's also why milk based products like yogurt or probiotic drinks have very long shelf lives. The milk-based probiotic drinks in particular have a fridge life of several months, and that's due to the bacteria cultures in them rather than preservatives... Juices lack all of these protections though, so at least for juices I think pasteurization is a must.

Staff member
Gotta love it when a staff member bumps a beer thread.

I need to go through the shots on my phone and pull out all of the different kinds of I&G that I've had over the last couple of years.

Staff member
Moderator
I got two for the evening. 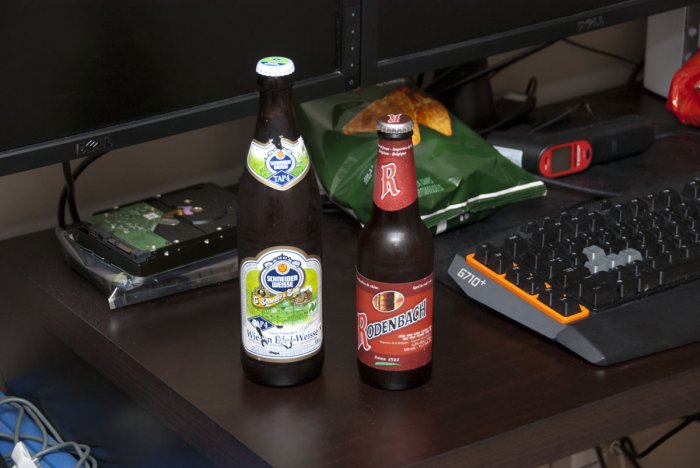 Only had the Rodenbach so far. It's a sour... didn't realize that. It's good for a sour, but not for me.

Staff member
Last night I picked up some organic honey beer called Honey Dew (pics to follow), but consuming it had to be put on hold when my boy ended up being sick...again.

Chances are I won't be able to get at it until Tuesday. Good thing there's a dozen Innis & Gunn in the fridge to keep it company.